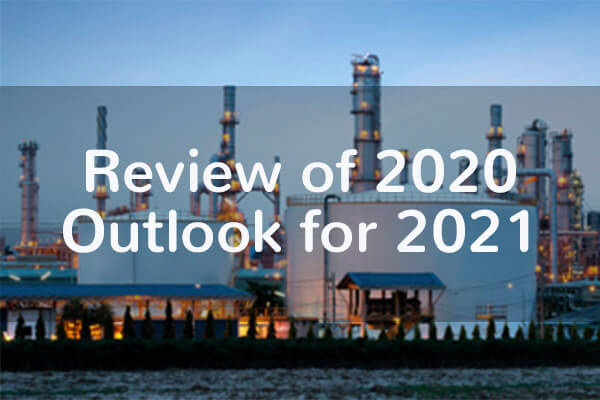 2020 was a very strange year. The impact of the COVID-19 pandemic was the major factor for the Chemical Industry but the locked down economy with fewer plane and car journeys highlighted the long-term consequences of environmental issues whilst the preparations for Brexit and a new trading relationship between the UK and European Union were hampered by the lack of clarity of the deal.

With over 2 million deaths around the world, the COVID-19 virus has inflicted personal tragedy on many communities and families, as well as being largely responsible for a major shock to the world economy.  In the first half of 2020, demand collapsed as world came to terms with the new deadly virus and ‘lockdowns’.  As people learned how to operate at a social distance and to work from home, business activity began to recover. Consequently, the final outturn for the industry was not as poor as had been feared. Despite changing consumer behaviours, disrupted supply chains and travel restrictions, the Chemical Industry’s inherent resilience has meant that many companies have come through the downturn, stronger and ready to face the challenges of 2021.

The level of mergers and acquisitions within the chemicals sector has been affected by the shocks of 2020, but deals have continued to be signed, even during the various ‘lockdowns’. Some potential deals were derailed by the new economic conditions, but others were able to continue. Natrium Capital was delighted recently to announce it has advised Solvay on the sale of its North American and European amphoteric surfactant business to OpenGate Capital, and nearly all of the sale process was undertaken in this era of homeworking, social distancing and minimal travel.

Authorised and regulated by the Financial Conduct Authority | Copyright © 2023 Natrium Capital Ltd. All Rights Reserved.
Our Cookie Policy: We use cookies on this website for functionality and to monitor traffic on the site only. We do not collect data for revenue or advertising purposes and will never sell or pass on data about your visit to any third party. Continued use of the site signifies your agreement to this. ACCEPT
Privacy & Cookies Policy

This website uses cookies to improve your experience while you navigate through the website. Out of these cookies, the cookies that are categorized as necessary are stored on your browser as they are essential for the working of basic functionalities of the website. We also use third-party cookies that help us analyze and understand how you use this website. These cookies will be stored in your browser only with your consent. You also have the option to opt-out of these cookies. But opting out of some of these cookies may have an effect on your browsing experience.
Necessary Always Enabled
Necessary cookies are absolutely essential for the website to function properly. This category only includes cookies that ensures basic functionalities and security features of the website. These cookies do not store any personal information.
Non-necessary
Any cookies that may not be particularly necessary for the website to function and is used specifically to collect user personal data via analytics, ads, other embedded contents are termed as non-necessary cookies. It is mandatory to procure user consent prior to running these cookies on your website.
SAVE & ACCEPT